This has been one tough week.

I won’t go into details, but suffice to say that I spent Monday afternoon calling eDreams to correct a mistake I made with a flight I booked, and waited three hours before they answered. Three hours. And in the end I didn’t even get a refund. I’m so happy it’s Sunday now.

Anyway with one hitch coming up after the other and no apparent end in sight, what happened last Thursday really helped my (by that point suicidal) mood: I saved a beetle.

And not just any beetle – this beautiful little rose chafer

What happened was that on Tuesday, I heard a noise. A buzzing. Which isn’t strange, because now that it’s Spring our windows are open most of the day and the plants are basically a continuum from the balcony to the living room. Insects wander. I went to investigate and found nothing. So I left the windows open wider, hoping the (what I thought was a) fly would exit on its own watch.

On Wednesday evening I heard it again. A thick, low buzzing, then the clear sound of a large insect banging into the window of our indoor balcony. It was late, so I opened one of the windows and hoped for the best. Wednesday was the worst day this week, as anyone on my instagram or facebook knows (you can click here if you’re interested); a trapped insect was the last thing on my mind.

So when on Thursday morning I heard it again, I went into emergency mode. Something had been stuck in my house for days and it was obviously in trouble. This time, I was lucky enough to see it as it fell into one of my empty vases after crashing into the window again and found a green gem, on it’s back, struggling. 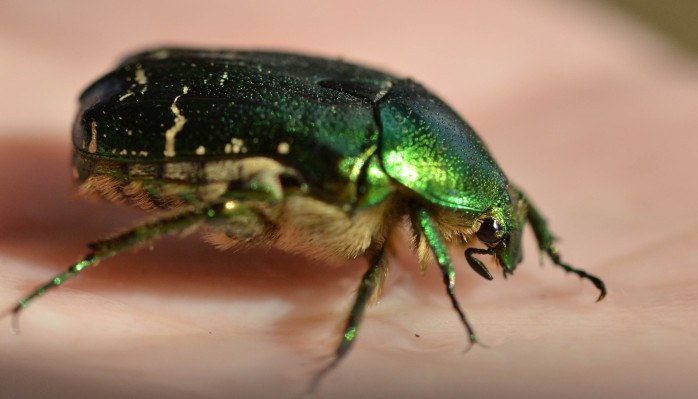 I thought fast and instead of letting it go into the outdoor potted plants I remembered reading about feeding tired bees a water and sugar solution; that sometimes they were just hungry and dehydrated. But was this beetle a nectar-lover? I looked at the beetle again and had a flash of a memory – taking a photo of one on some flowers in the mountains. Not a carnivore then.

With the little guy in my hand I went to the kitchen and grabbed some honey (thinking it would be more natural than processed sugar, which I now discovered is debatable) and a spoonful of water, mixed with my finger until the honey dissolved and poured some in my hand, right under the beetle.

It flinched, raising its legs to avoid the water. I worried – would the sticky solution harm the wings and body? But then it bent its head and, to my wonder and surprise, started lapping the watery honey with its insect tongue – a pair of furry-like pincer-like things under its head. 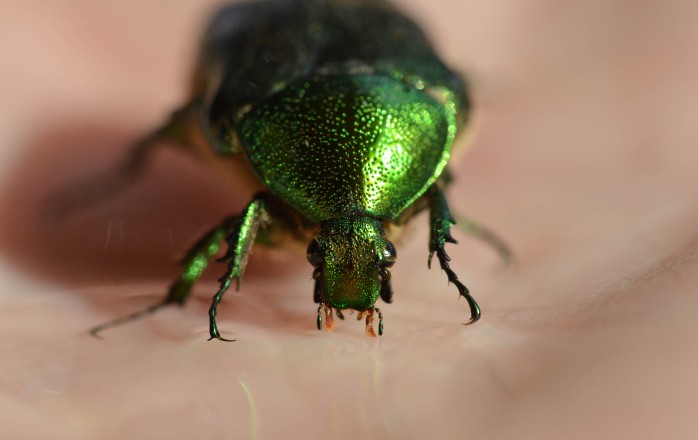 In the photo above you can see the feathery brushes that the beetle is using to lap up the liquid. Here and here you can see and read more about this mouthpart, called galea. It drank a lot for such a small insect – nearly two whole spoonfuls!

After seemingly having drunk its fill, I let it go under the outdoor plants, hoping it would recover and fly away the next day.

When I checked on Friday morning, it was gone and I was happy.