Wine tasting ended up with us looking for a place in which to eat something. We were starving and it was late, so we asked advice from our fellow winetasters and they told us to go to Laguardia.

When we were nearly there we discovered that we had unknowingly re-entered the basque country! La Rioja is strange that way. 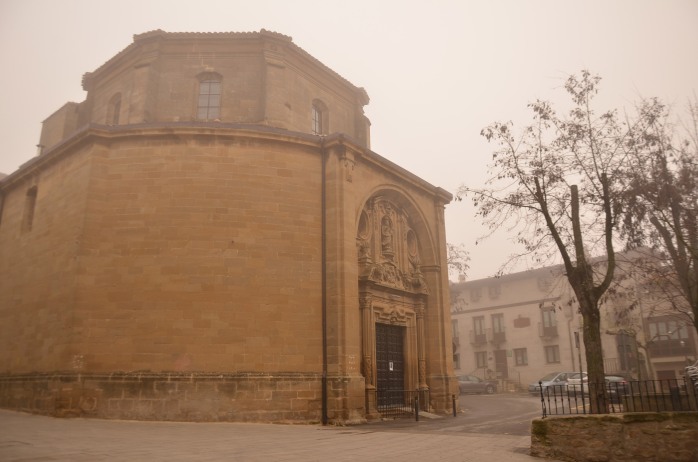 Laguardia was tiny, and it was still wet. It has large, thick walls around the town that protect it (guard it, I’d like to say) and a flock of magpies to help.

We had pintxos in the best local bar – it was the only open one, but it was also very good – and then moved on.

We drove back to Spain (ha) and towards a church called Santa Maria de la Piscina. Saint Mary of…the pool.

It was built in 1136, following the last wishes of Ramiro Sanchez de Navarra, who had gone to the Holy Land to attack Jerusalem. He got there passing through the Pool of Bethesda (Piscina de Bethesda) and obviously never forgot how important wading through this pool was. Or something to that extent.

Getting there, we passed rows and rows and rows of wine plants, resting. I was very perplexed by the number of grapes left behind – to rot, I believe, because most were covered in a mouldy substance. If anyone knows why they were left there, do tell!

Once we arrived we realised we hadn’t made a mistake in driving there. 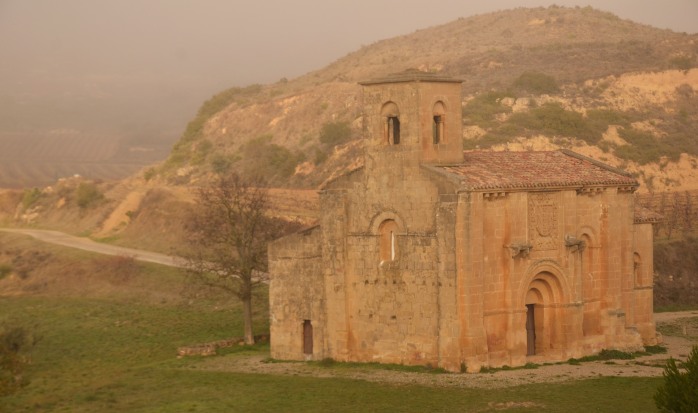 Next to the church, there was a necropolis, probably dating to the 10th century or thereabouts, with about 40 human-shaped holes carved from the stone (they’re tombs). Kind of creepy! 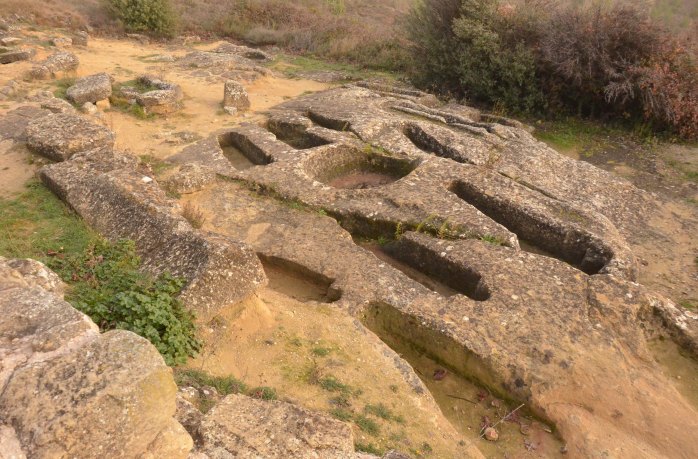 It was great. Must-see if you’re in the area!

Next, it was time to turn the car towards Madrid.

One last photo of the vineyards… (and the fog)

By the time I checked that I had no one behind me, stopped the car, changed the lens in my camera and went back, the deer were nearly over the edge of the hill. And although I did take Boyfriend’s car over an unpaved road, looking for where they had run off to, they were well ahead of us and we didn’t see them again. They were very cool though and I was very happy to have seen them!

Also, do you think that’s another deer in the background or a greyhound?

We got to Madrid safe and sound, after about three hours.

It was a fantastic trip and I honestly hope to be able to go on another road trip soon – they’re my favourite kind of travelling!

Thanks for following and for liking: keep an eye on this site because I have another trip coming up. It won’t be a road trip but I might manage to get some good shots 😉