The wolf fountain of Piornal

After Valdastillas, while we were driving in the Valle del Jerte to see the cherry blossoms, we drove through Piornal. And stopped, for a coffee. The first bar we found was full – the queue to pay reached the door. So we kept looking and found another one, that at 15:30 – very, very early for Spain – had already finished all its food (never was I so happy as to have taken a picnic!). After a coffee and a drink (we hadn’t brought enough liquids, unfortunately. It was also hotter than we had imagined..) we strolled through the town and found this fountain. 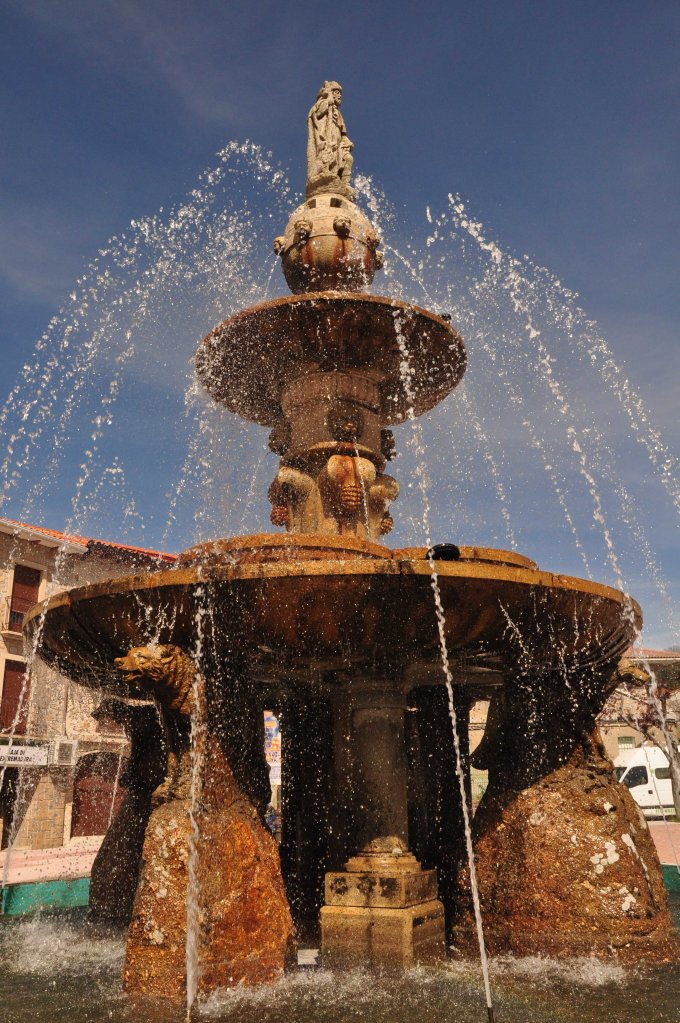 I thought it was particularly beautiful. So here is a post about this fountain and the village we found it in.

Piornal is the highest village in Extremadura, at 1175m, is covered in meters of snow every winter and has the strangest tradition in January (see a future post). The tiny village probably started out as a summer settlement for shepherds that took their animals up the hills to pasture. No one – not the arabs, not the roman and not the visigoths disturbed this village that had only bad weather and a fragile economy to boast about.

Piornal got its name because of the many white piornos (broom plants) that, together with the cherry blossoms, turn the village’s surroundings white during the Spring. Very bucolic. The whole area is very bucolic, now that I think of it.

To give an idea of how isolated and shunned this poor village was, suffice to say that the first road to Piornal was built in 1927. 1927. Really.

Anyway, information on the fountain is hard to come by. First I did an internet search, but came up with nothing. Nada. Zilch. So then I contacted the author of the only real website I found on Piornal, and he (really kindly, I must add) wrote back saying that the only information he had was that the fountain was built sometime in the 1970s. He also sent me a link to some photos that called the fountain Fuente de las Seras. Looking deeper into the internet I followed this name to its probably source, the name Fuente de las Eras – the square is called Plaza de las Eras, so that’s probably why some people call it that.

I’m not really sure how, but in the end I found sufficient proof to say that, without a doubt, Fuente de San Roque is the original name. The man reining over the fountain has a walking stick and a dog at his feet – he is most probably Saint Roch, a blessed man from Montpellier with a biography that oozes miracles right from the day of his conception from a barren mother. The dog on his right (not very visible in the first photo here below, but more so in the first photo of this post) is a clear symbol of Saint Roch: half dead in a forest he was saved by a nobleman’s dog who brought him food and cured his wounds and gave him the responsibility of being named Patron Saint of dogs. He is also lifting up his robes and showing his left leg, which apparently he tends to do to remind people of the wounds the dog cured (how sweet!) – or possibly a bubonic sore, because he is also associated with the plague (less sweet, honestly). This website, about saints and the symbols to recognise them in art, relieved me of any doubt. If you need more convincing however, I read here that Saint Roch is also often depicted wearing a cockleshell (symbol of pilgrimage, probably the one he went on to Rome) on his hat.

That man is Saint Roch!

Here are some photos, depicting Saint Roch all the way up, some stylised bears (or could they be lions?) right underneath and the wettest, most annoyed wolves and terrified looking foxes underneath. 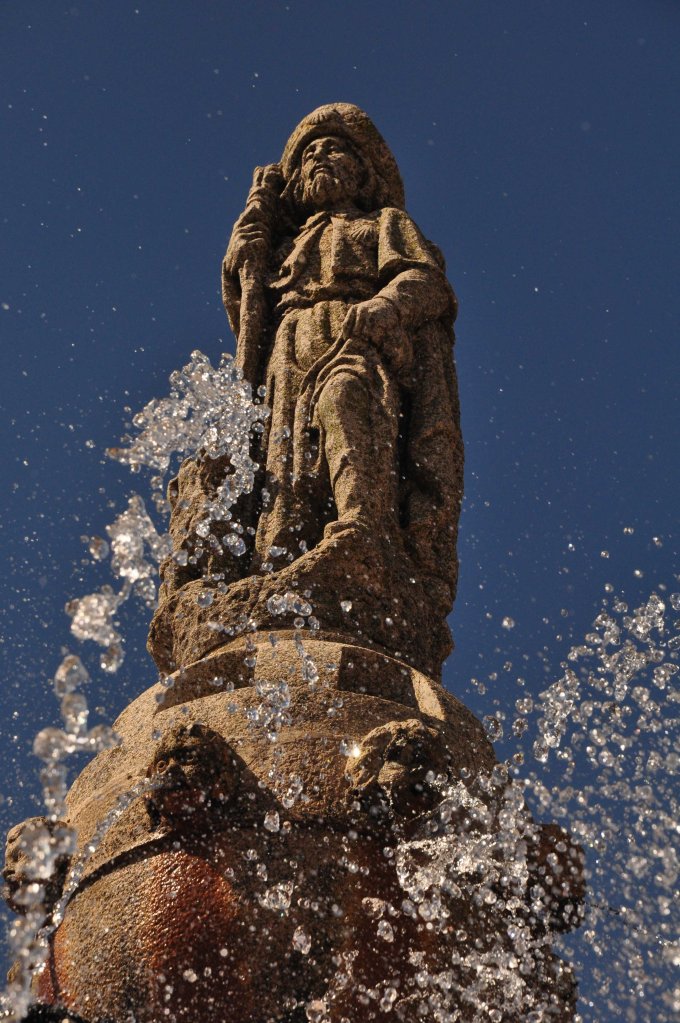 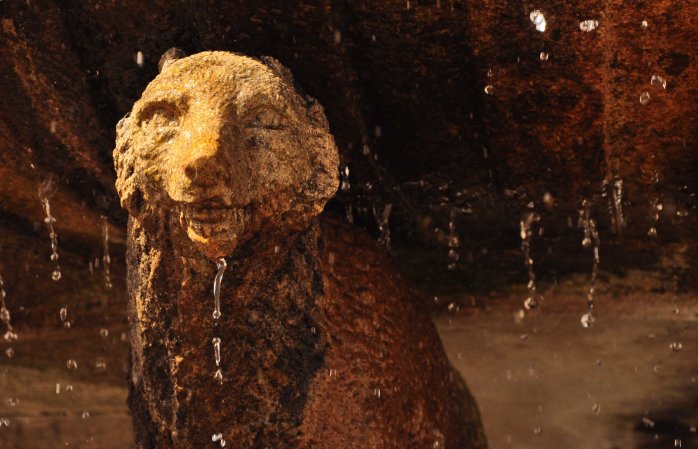 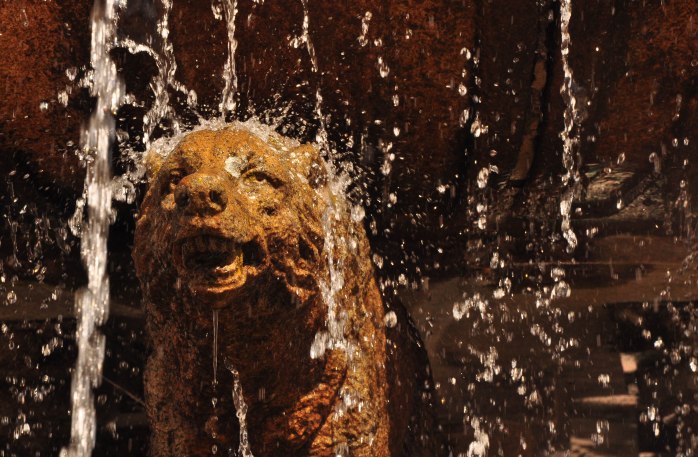 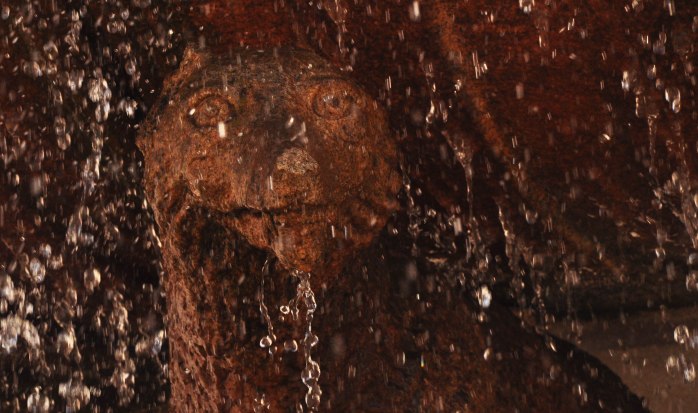 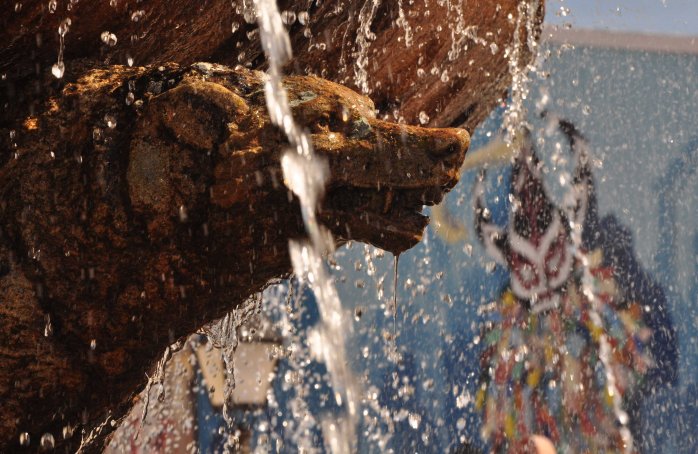 I seem not to be the only one interested in this fountain, considering this odd video. It’s 3 minutes long. All you can see are shots of the fountain. Mah.

I’m not entirely sure why Piornal has a fountain dedicated to Saint Roch, but probably since the village was originally a shepherd’s village, dogs, wolves and foxes were the things they were most interested in.

And scary coloured monsters that drag livestock away to munch on its bones, as we’ll see in an upcoming post. 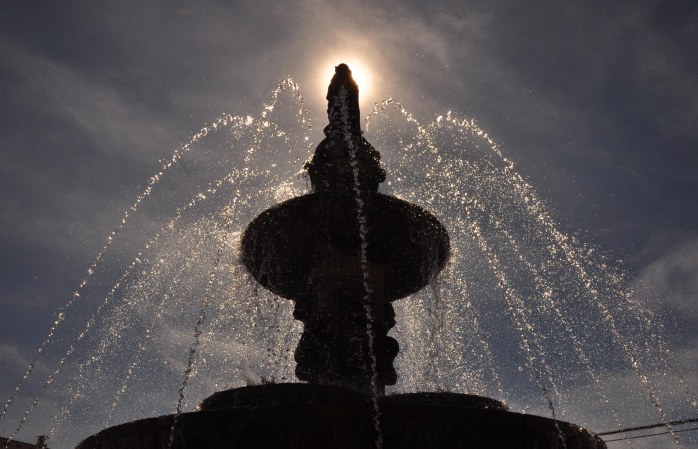