On the way to Cuba, we took the direct Air Europe flight. There was a cheaper one, and it called for

– flying across an ocean with Aeroflot

We chose the direct flight. Not that I have anything against Aeroflot… I guess it’s just the name. I guess?

Anyway, on the way there it was important to sleep. That’s what I said, and repeated various times, to Boyfriend. The last time I said it was just before loosing consciousness on his shoulder… about five minutes after boarding. I’m good that way ^_^

The problem was that, albeit being a direct flight, it was still nine hours long. So after sleeping a while, reading my new book, checking out the guide book, eating, then watching The Boxtrolls (so cute!) and after that a seriously depressing film that for no reason should have been shown on a flight with children, young adults, adults or elderly people as it talked about a girl nearly dying in a car crash (no talking of crashing on planes!) and losing all her family (no talking of dying on planes!!) and crying for half of the film which got me hiccoughing like a ten-year-old..after all of that plus a few rounds of Plants versus Zombies, I got the piece of paper with the strict immigration rules, flipped it over and doodled.

I started as I usually do, with a person

And then, as it often happens, I drew the body but didn’t like it. Got stuck with the arms and…bored. So I drew my bear. I draw him a lot, and he’s nearly always surrounded by bubbles and bees. And I drew an orca. Because why not. 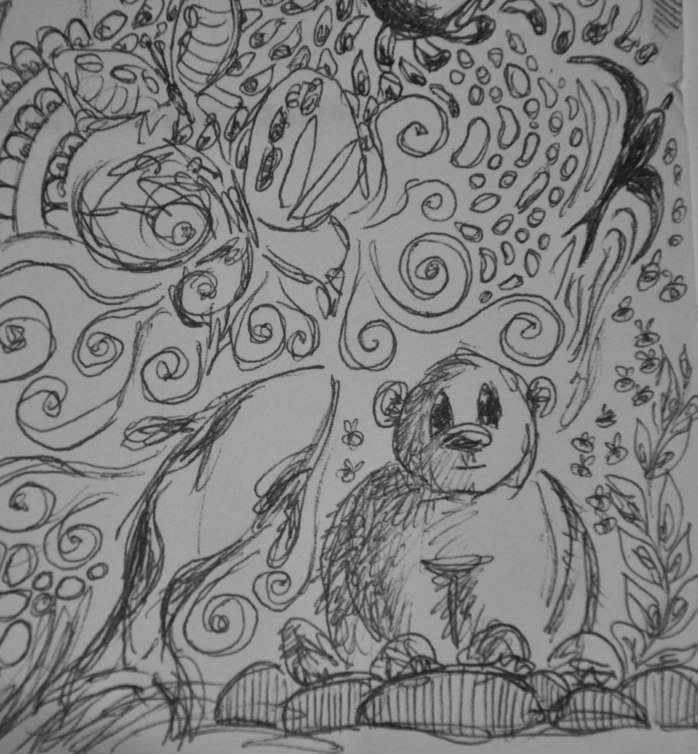 And then I drew a seahorse, but his face was all strange so I drew over the seahorse and what came out was much more satisfying.

Finally I went back to that arm and gave it some life. Literally. With trees and branches and birds and fish and music… Anything I could to get that horrendousness out of the picture!

And then, well, I filled the doodle up. This is what it looks like now.

When we went to IKEA (yes, we had to) the landscape was missing something. Only when we drove back did I notice what: snow.
Germany is both what you’d expect and surprising at the same time. Tübingen, where I spent last weekend, looked like a german town should look like. But then, right under our rented flat.... chickens. And odd ones, at that.
And finally, Biagio. Biagio is my cousin, and he has gotten so much calmer and better-mannered 💜 doesn’t he look like a floating head in this pic?! Yes. I was holding a piandina con salsiccia e stracchino 🤩